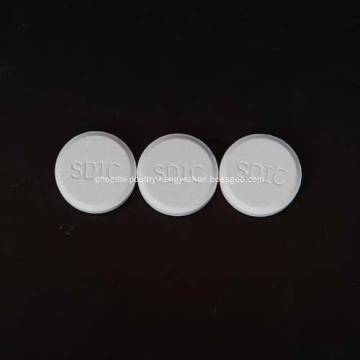 The microbiologic effectiveness of sodium dichloroisocyanurate (NaDCC) tablets used on a routine basis at the household level by a vulnerable population /was assessed/. In a 4-mo trial in Dhaka, Bangladesh, one half of the 100 participating households received NaDCC tablets and instructions on how to use the same; the other one half received a placebo and the same instructions. Monthly samples of stored drinking water from intervention households were significantly lower in thermotolerant coliforms (TTCs) than those of control households (geometric mean, 2.8 [95% CI: 2.2, 3.6] versus 604.1 [95% CI: 463.2, 787.9]; P < 0.0001). While 61.7% (116/188) of samples from the intervention households met World Health Organization (WHO) guidelines for 0 TTCs in drinking water, none of the 191 samples from control households met such a benchmark. Residual free chlorine in water samples suggested that householders consistently used the intervention, but 11.7% of samples exceeded the WHO guideline value of 5.0 mg/L, underscoring the need to ensure that tablet dose and vessel size are compatible.

Sodium dichloroisocyanurate (SDIC) is a chemical compound used as disinfectant, biocide, industrial deodorant and detergent. It is found in some newer water purification tablets/filters. It is more efficient than formerly used water disinfectant. Mechanism of action is the release of chlorine in low concentrations by constant rate. 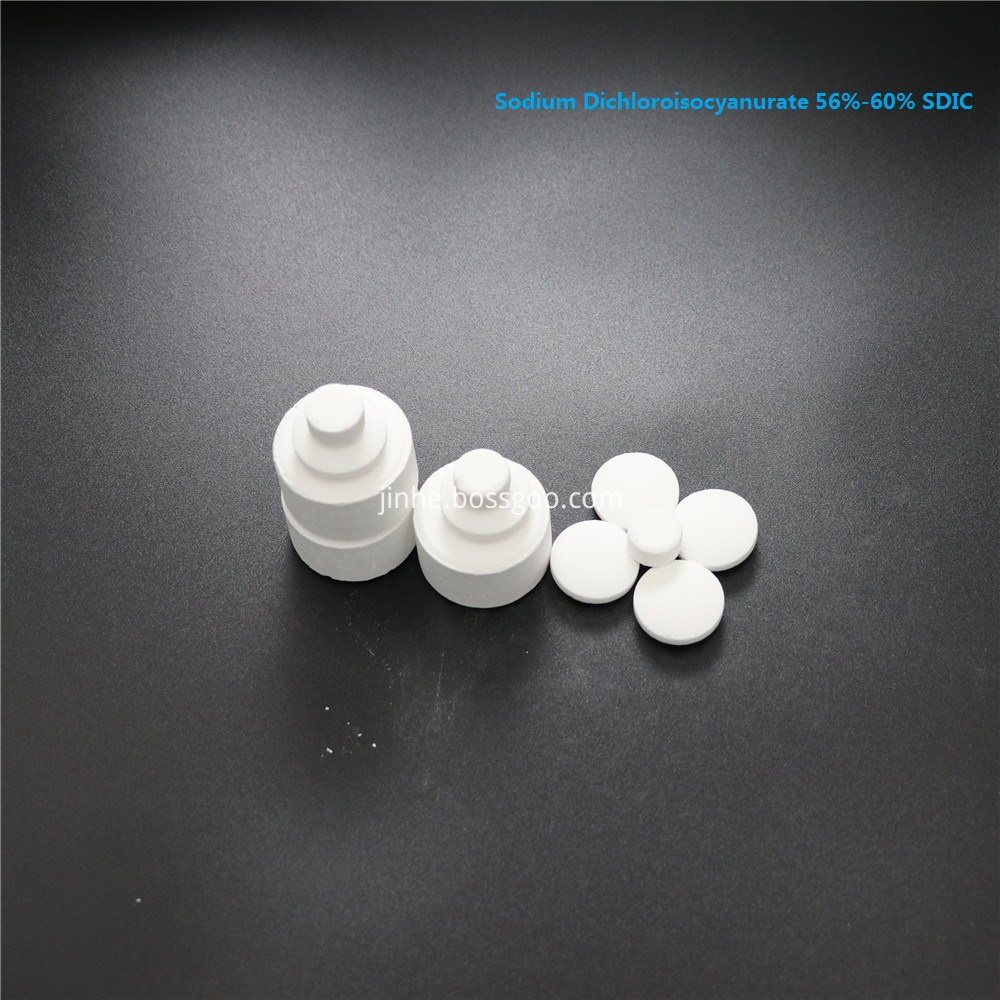 1) Be used in swimming pool and drinking water treatment, clean the industrial circulating water.
2) Be used to sterilize tableware, and as preventive disinfection of house, hotel, hospital and public place; used on the environmental sterilization of raising fish, silkworm, livestock, poultry and so on.
3) Be used to bleach the textile, to prevent wool from shrinkage, to stop eating paper by moth, and act as rubber chlorination. 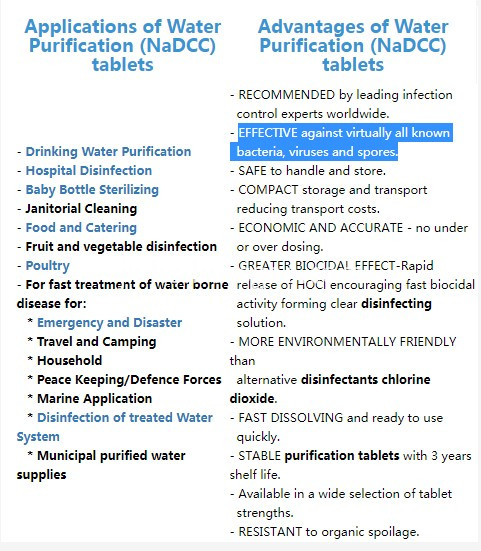 Sodium dichloroisocyanurate is a white powder or granular solid. It is the broadest, most efficient and safe disinfectant among oxidizing disinfectants. It is also the leading product of chlorinated isocyanurate.It can kill all kinds of pathogenic microorganisms, such as bacterial spores, bacterial propagators and fungi, and has specific killing effect on hepatitis virus. It can quickly kill and strongly inhibit cyanobacteria, red algae, algae and other algae plants in circulating water, cooling towers, pools and other systems.It can kill sulfuric acid reducing bacteria, iron bacteria and fungi in circulating water system.

Dichloroisocyanuric acid is a kind of highly effective, broad-spectrum, new type of internal bactericidal agent, which has a strong killing effect. At 20ppm, the bactericidal rate reaches 99%. Can kill a variety of bacteria, algae, fungi and bacteria. The chemical properties of sodium dichloroisocyanurate are stable, and the effective chlorine decreases by less than 1% within six months after preservation under dry conditions, which is convenient for storage and transportation.It is safe, easy to use, low dosage and long duration.

Yucheng Jinhe Industrial Co.,Ltd,which grew out of a history of more than 50 years of production Titanium Dioxide R/A State-owned enterprises Yucheng Titanium Dioxide Factory, is an international corporation, professional supplier of chemicals and related technical support.
Since the recombination of enterprise in 2003, Yucheng Jinhe Industrial Co., Ltd we extended our manufacture line to more series pigments such as Carbon Black ,Iron Oxide and chrome pigments by share&join brother factories ,Further more, we also establish a reliable supply system in our last decades market work, and get strong advantage on other chemicals supply. Through participation superior manufacturers,professional service and strongly technology support.
By the end of 2009,our productions have been exported to over 60 countries and regions in the world. including Asia, Europe, North and South America and Africa with international annual turnover more than USD20 million, 60% of the total annual sales revenue. Depend on high quality product and service, strong technical support, we enjoy high reputation and a lot regular customers throughout the world.We hope work together with regular and new friends to deep ploughing and extend the market, to create more brilliant to win the future.

Email to this supplier